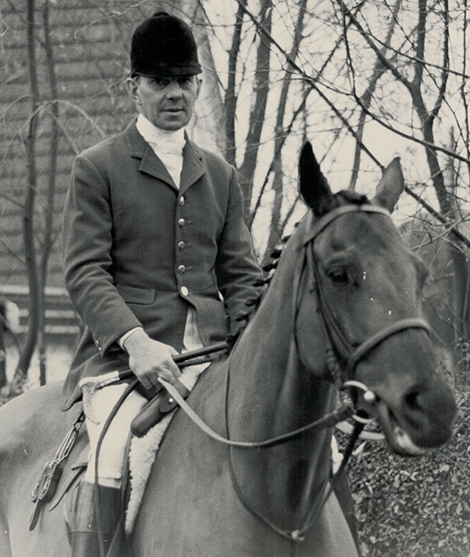 Earliest formal records of the Thurlow Hunt date back to 1770 under the Mastership of Mr James Paton. However, the Stuart Kings hunted in these parts from the early seventeenth century.

They were keen to combine their love of racing with hunting when visiting Newmarket. When Mr Paton’s Mastership ceased in 1800, the Thurlow country was used by various hunts including the Suffolk and East Essex until 1884, when the Newmarket and Thurlow was formed with its own pack of hounds and Mr J Gardner, a well-known farmer, was appointed as its first Master.

In 1970 The Newmarket and Thurlow agreed a merger with the Puckeridge Hunt. Both hunts, having many supporters and followers in common, saw the merger as an opportunity to share the maintenance costs. The amalgamation was welcomed, and the Puckeridge and Thurlow Hunt was formed.

Over the next few years the Mastership expanded to include Major Ted Barclay in 1982, Mr CH Sporborg in 1985 and Mrs D Pyper in 1987.

In 1985 a satellite pack was formed, and Mr Vestey built new kennels at Wadgells Farm, Great Thurlow. Thirty hounds were moved from the kennels at Brent Pelham and joined by 40 from the North Warwickshire (having sadly disbanded). The new pack hunted the northern end of the country on Mondays and Thursdays while the Brent Pelham based pack hunted on Wednesdays and Saturdays. In 1992 the arrangement was formalised, and the Puckeridge and Thurlow became two separate hunts continuing to meet on the aforementioned days.

The Thurlow country is roughly 13 miles from north to south and 15 miles from east to west and lies in both Suffolk and Cambridgeshire. The land is mainly arable with small pockets of grassland with hunt jumps and hedges. It is usually divided by ditches dug chiefly for drainage which can be deep and the going can be heavy.